(CNN)The set for "Starship Troopers." A gathering place for Emmy award winners. Home to the world's greatest video games. And next: horse manure.

Auto shows are tricky, but ultimately standard fare. Exhibitions? Sure. The E3 technology expo? No problem.

A week of world-class horses? That's a challenge.

"It is quite different," admits Jon Vein. He's the president of the convention center's board, overseeing the huge venue's operations.

"This is the most unique event, for all the obvious reasons: bringing in the dirt and manure, the horses and everything else," he continues.

"You're creating an entirely new environment."

Vein and the LACC are heading into year two hosting the Los Angeles Masters, billed as one of the world's most prestigious equestrian events -- and certainly among the sport's largest indoor spectacles.

For the Masters to be a success — and for Olympic champion showjumpers to be kept happy -- the LACC must be transformed into an equine paradise.

Brian T Edwards oversees Production Resource Group, responsible for 190,000 pounds of equipment at the Masters — including more than 10 miles of cable. Edwards is grateful for last year's experience as he plots the lighting, rigging and sound inside the arena.

His priority? Get into the venue, and get going.

"The biggest challenge is the limited amount of time we have to get in with our equipment and connect it to the ceiling of the building," says Edwards.

"A big part of the show is creating the footing [the surface for the horses], the grandstands and the VIP lounges, and that takes a long time -- the footing is eight inches thick or something like that, so it's a tremendous amount of dirt, 60 or 70 dump truck loads.

"Before that can happen, we have to bring in enough equipment to span the length of 12 football fields and lift it out of the way. It's a tremendous amount of space."

While Edwards and his team haul video screens and sound rigs into the rafters, the horses are on their way.

Forty-four horses are flying transatlantic on a charter flight from Europe. Another 20 to 30 will be flown in from the eastern seaboard; more than 200 will arrive from the local area by truck.

"My main job is to make sure the horses arrive safe and well," says Filip Vande Cappelle, logistics manager for European Horse Services.

"To make the stables, we start off with a parking lot outside the convention center and end up with five-star stable accommodation. We start on Tuesday and by Friday everything is ready."

Every stable must be immaculate before the horses arrive. "No surprises," is Vande Cappelle's motto — just in case, two vets with a horse ambulance will remain on standby all week, with another vet on board the charter flight.

Horses can create some interesting smells. For the convention center, that can't be left to chance. Ventilation is next on the list.

Vein says: "If you have a common air-conditioning system, pumping air from an area with horses to another where you're hosting a completely different event — where people are walking around exhibits and so forth — you can imagine the potential challenges with that.

"They had to do a lot of things with air filtration."

Vein, only half-jokingly, says his team has had 'dozens' of meetings involving horse manure in the lead-up to the Masters.

But odors are not the only things up in the convention center air. By now, Edwards is working on finishing touches to the lighting.

The LA Masters is an indoor event, which -- while not as uncommon as it used to be -- is still relatively unusual at showjumping's highest level.

Horses are used to sunshine. Edwards and his team must try to make the man-made chasm that is the LA Convention Center feel like the great outdoors.

"We have to create a light level that is intense enough for the cameras to capture the images, but also an even field of light without shadows and variations," Edwards explains.

"The horses are used to looking at their jumping courses as if the sun is lighting it, and they are afraid of shadows and uneven lighting patterns. They may refuse a jump because they think there's something scary there.

"We have to keep that very even lighting to give the riders the best opportunity."

While Edwards' team installs brand-new LED lights in the gods, Matthieu Gheysen is preparing for California's leading lights in the VIP areas.

Gheysen coordinates the experience guests will have at the event, once everything is in place. It's a job he does at the Hong Kong and Paris Masters, too, but LA demands unique touches.

"Every culture is different," says Gheysen. "We need to have a different approach in the way that we work with people.

"In Hong Kong, for example, we allow no food in the grandstand. Here in the U.S., people were kind of shocked about that — so we changed it.

"In Europe, people know exactly what to expect. Here, the event is pretty young. Many people have heard about it but have a hard time understanding what it's really like, what they're going to be experiencing."

That's where Frank Lombaers comes in. He is one of the final, and biggest, pieces of the puzzle.

As the show director, Lombaers says he "directs everything happening live at the event."

"It's an event which couples top equestrian sport and brings back the word 'show' in showjumping," he enthuses. "That means in the arena itself and also in the village [of stores and exhibits], at the heart of the event, where glamor, luxury and lifestyle is happening.

"You want people to walk in and say they have never seen the venue like it. That happens with grandstands, with 1,500 metric tons of footing, a lot of graphic identity, a lot of decor. And it gives a very special atmosphere. Visitors have to feel at home and enjoy top sport."

They also have to figure out what's happening.

In equestrian sport, broadcasters work hard to help their audiences understand some of the sport's more complex nuances. Inside the arena, that's just as tough.

"We need to bring the sport to the visitor in such a way that they anticipate with knowledge, they feel what is happening," says Lombaers.

"That is one of the big things we changed in the past few years: we're giving the vocabulary to the audience, so they can not only look at the rider but know what their intentions are.

We explain exactly what the challenges are, so you don't just see the rider and horse take a jump but you anticipate their approach, the difficulty of the jump, how many strides they will take in between. That will create an audience which is part of the show."

For Vein — no horse expert — it's fascinating to watch the Masters make itself at home on the calendar.

"This is one of the most exotic and most challenging shows we have," he says.

"Our events are all over the board, from things like anime and the auto show to hosting the Governor's Ball for the Emmys — a hundred feet and a week apart, give or take, from the Masters.

"There are a number of sports taking hold globally and I think this is an important one. Having a footprint in the U.S. and in Los Angeles specifically can help elevate the sport. We're in a position to attract a lot of people of notoriety -- when they attend you get a spotlight shone on the event in a way that you might not without that element."

Lumbers adds: "We don't have the same number of athletes or spectators as soccer or basketball, but the entertainment value? Absolutely. It's spectacular. The audience is in awe of what the horses do.

"If you want to see the future of showjumping, come and see the Masters." 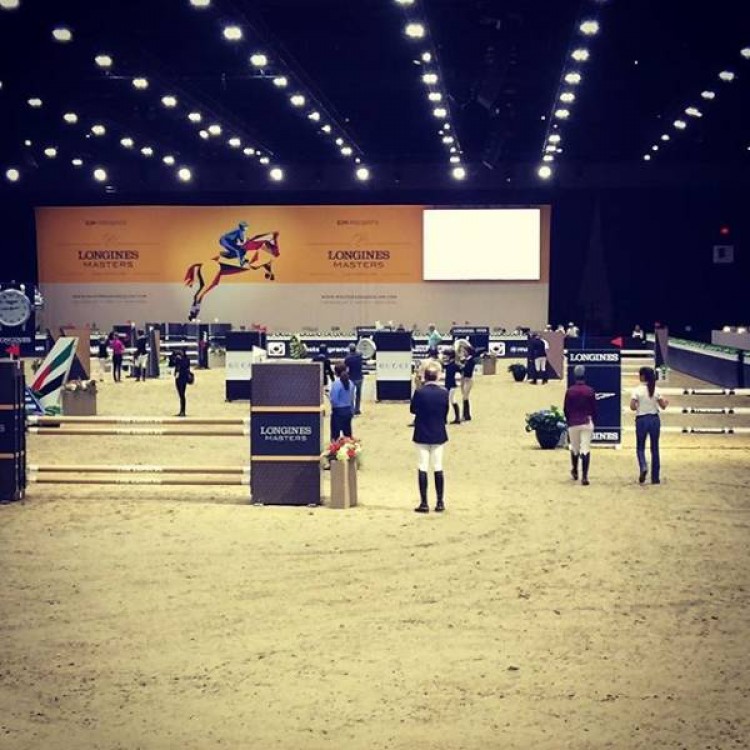